Mbale city authorities have diverted traffic of heavy trucks which carry transit goods to the city centre from Nabuyonga Rise up the road due to deep big hole that  fatty caused nda fatal accident today, 10th May, 2022.

According to eyewitnesses, two heavy trucks knocked each other due to the narrowness of the road as they tried to dodge a big deep hole which developed in the middle of the road last week.

Kasimu Namugali the mayor of Mbale city says that they have diverted traffic from Nabuyonga road to Mbale- Kumi road through the city centre to pave way for repair of the road which is soon going to kick off.

He adds that Nabuyonga rise is amongst four roads which were constructed two years back by DOTT Services with 21 billion shillings under the USIMID program.

Namugali also says that they have already talked to DOTTE services to come and repair the road before reopening the road.

Sadoki Mugawu and Samuel Wanambwa both truck drivers expressed their disappointments with the diversion saying that this is going to create jam, accidents and slow movement of traffic in the central town.

Rogers Taitika the Elgon region police spokesperson has confirmed the accident saying that the driver of Hima cement truck number UBH 0391T is currently in critical conditions at Mbale main regional referral hospital but the one of unknown fuel tankers who caused the accident is on the run.

He says that they are still hunting that driver who caused the accident but urged drivers to desist from driving recklessly. 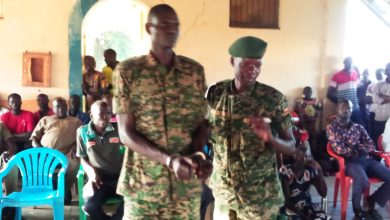